Product prices and availability are accurate as of the date/time indicated and are subject to change. Any price and availability information displayed on [relevant Amazon Site(s), as applicable] at the time of purchase will apply to the purchase of this product.

Product prices and availability are accurate as of the date/time indicated and are subject to change. Any price and availability information displayed on [relevant Amazon Site(s), as applicable] at the time of purchase will apply to the purchase of this product.


From World of Warcraft by Mega Bloks, build and customize Deathwing’s Stormwind Assault, an epic battle as Deathwing sweeps in to burn the buildable Stormwind Castle. Join King Varian Wrynn as he and his trusted Alliance allies, Barton, the Gnome Death Knight, and Mythrin, the Night Elf Priest, defend their home from a burning rampage with a working catapult launcher. Also includes a random loot drop – armor or weapons – to add to your collection! Ideal for ages 8 and up.

Build and customize the 809-piece Deathwing’s Stormwind Assault play set from World of Warcraft by Mega Bloks. Deathwing, the dragon, sweeps in to burn the buildable Stormwind Castle. The set includes three detailed mini-figurines with interchangeable weapons and armor. King Varian Wrynn, the human warrior, Barton, the Gnome Death Knight, and Mythrin, the Night Elf Priest, defend their home from a burning rampage with a working catapult launcher. This set has been meticulously designed with unprecedented quality and detail, for World of Warcraft enthusiast eight years or older, young and old. 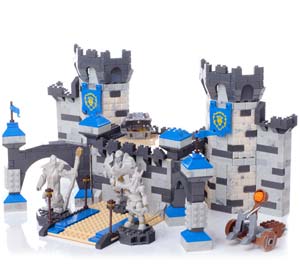 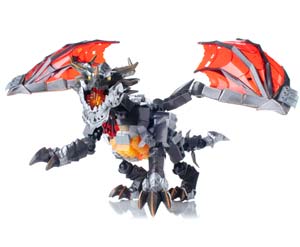 The buildable Stormwind Castle contains towers with rounded brick corners for a realistic stone feel. The Valley of the Heroes castle includes three statues, and the flags that drape the towers display the signature blue color scheme of the Varian.

Assault the Stormwind Castle with the Buildable Deathwing the Dragon

Build the dragon, Deathwing, with over a hundred customized pieces. The dragon features transparent, tattered red wings, and multiple ball joints for flexibility. The color of Deathwing’s realistic body is made up of a mixture of multicolored blocks and pieces.

Protect the Castle from Dragon Assault with the Catapult

Fire the catapult, with the working launcher, to fend of the deadly attack of Deathwing. The catapult is powered by a simple rubber band.

Build and Customize the Three Mini-Figurines

King Varian Wrynn is equipped with a Varian chest plate and two shoulder plates. His weapon is a Shalamayne sword.

Barton the Gnome Death Knight, has Netherforce chest plate and two Damselfish shoulder plates. His weapon is a demise.

The mini-figurines feature “hand-painted-like” detail, and all armor and weapons can be mixed and matched between different World of Warcraft play sets and character sets (sold separately).

Check out the Secret Loot for an Alternate Armor or Weapon

From rare to legendary gear, this Stormwind Assault play set contains a secret piece of armor or weapon that you won’t find anywhere else. This special item is random and collectable. 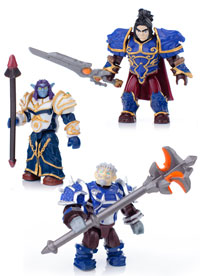 Not Just For Kids

The Deathwing’s Stormwind Assault play set is great for kids eight and up, but adult enthusiasts of World of War Craft will also enjoy building these elaborate block models and appreciate the quality and game details Mega Bloks has implemented into the design of this set.

Testers found that Mega Bloks has provided a quality and well-designed play set. The pieces fit together as expected. It’s apparent that there was plenty of attention focused on the small, realistic, and game-like details.

The instructions are colorful and provide easy-to-follow, step-by-step assembly. The figurines have the look of hand-painted fantasy figures, and the shades and colors of the bricks display a detail that is relatively unprecedented in previous block sets. There are no stickers in the entire set to apply and all graphics are printed on the actual pieces.

What’s in the Box

WARNING: CHOKING HAZARD–Small parts. Not for children under three years of age.

I have created a QR code digital Menu product. Here is the deal, and why I was gone…